Tarab: Travels with My Guitar (Fully revised and expanded B format edition)

Tarab: Travels with My Guitar (Fully revised and expanded B format edition)

‘By any measure, Cleves deserves to be mentioned in the same breath as Thesiger, Burton and Newby. He is an astute observer, a passionate participant…’ Bruce Elder, Sydney Morning Herald

‘An extraordinary tour of wild times and wilder places. I have laughed, gasped and loved very startling page. ‘ Jeni Caffin

From the Sudan to Northern New South Wales, Tarab is an epic, mesmerising tale of high adventure and the search for meaning. Carl Cleves escapes national service in Belgium to live in South Africa at the height of the Apartheid era. So begin the adventures and quests, wanderings and narrow escapes, mishaps and illuminations of a guitar-toting troubadour in his roles as young beat poet, law student, single father, relief worker in India and recording star in Brazil. Cleves’s page turning memoir is no simple music biography, but rather the travel story of an artist’s quest for tarab: a place where music and poetry bestow true bliss upon the lucky one. It’s by turns philosophical, funny, adventurous and insightful.

Fully revised and expanded, this new edition of Tarab is a must read for all lovers of travel literature. 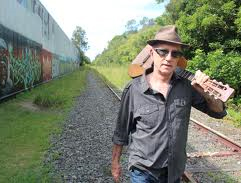 Carl Cleves was born in Belgium. He graduated in his Belgian Law Studies and was offered a scholarship to study traditional African music with ethnomusicologist John Blackingin South Africa. This started off many years of travel throughout Africa, the Middle East, the Orient, the Pacific Region and South America, guitar in hand, acquiring musical skills and an endless supply of stories and songs.

His adventurous life has included stints as an antelope trapper in Uganda, relief worker in cyclone struck India, radio broadcaster in Africa and fisherman in the South Pacific.

While living in Brazil he became a popular singer and bandleader.

Carl has released five solo albums and another six with Parissa Bouas, a Greek-Australian singer- songwriter who became his wife, under the moniker The Hottentots. His songs have won numerous awards in the categories of folk, world and roots music, including two of the most coveted national Australian Music Awards (Music Oz and the Australian Songwriters Association). Carl currently lives in Byron Bay, Australia.

This is a book to curl up with and be transported to other places and other times. The intimate tone gives the reader the feeling of listening to the melodious lilt of a magical weaver of tales. The rich prose is filled with images that will stay with you long after the last page. In Tarab, Cleves has shown himself to be a writer of great talent in prose as well as in song. More tales will surely follow.

We live in an age of faux travel writing. The great adventurers of the past – Wilfred Thesiger, Sir Richard Burton, Eric Newby – have been replaced by clowns who devise shallow rationales and write lame comedies that pass for travel stories. This thought occurred to me as I read this remarkable book by Carl Cleves. Here is the story of a young Flemish man who turned his back on the security of an affluent middle-class European life and headed off with a young wife and nothing more complex than a desire to experience the richness of the world. By any measure, Cleves deserves to be mentioned in the same breath as Thesiger, Burton and Newby. He is an astute observer (his succinct explanation of the historic forces at play in Darfur and Sudan is exemplary), a passionate participant and a man prepared to undertake interesting, but never crazy, experiences. His wanderings started almost as an accident. He had accepted a scholarship to study law at Witwatersrand University. On arrival in South Africa he realised he had made the wrong choice. Fortuitously, he changed to musicology, studied African music and headed north with his guitar to experience the music of the continent in all its diversity. Along the way he deals with deep apartheid-era racism, the harshness of the virtually lawless military forces, smuggling bush babies across borders, almost signs on with a rabid racist who wants to sail across the Indian Ocean and all the time recounts his unique experiences in language so vivid you feel you are travelling with him. Eventually, Cleves arrives in Australia, forms the world music outfit The Hottentots and, after some time in Sydney, heads for Byron Bay. Cleves is a rarity. He is a true traveller in an age of holidaymakers and gawpers. He heads out to experience the world and reminds his readers that true travel is about sinking deeply into cultures and allowing unique experiences to change your life. The result is a journey that enriches Cleves and the reader.

…Cleve’s memoir is at its most enjoyable when the sheer adventure of his experiences, from the hair raising, sublime and serendipitous takes hold. Belgian born Cleves has done what many travelers only dream of, spent years on the road sharing his love of (arguably) the world’s only common language– music. Romantic love is won and lost along the way but it is Cleves’ passion for music that encourages people to open their hearts and homes to him across the globe.
– Extract of Review by Sally Keighery, Readings Monthly 2008