‘One of those rare books that cracks the world open. Haunting, exquisite, startlingly original.’ James Bradley, author of Clade

‘Dreamlike and prophetic and true. Like the best translators, Sulway pushes language to defy its limitations, to defy our own.’ Kristina Olsson, author of Boy, Lost and The China Garden

Samuel and Morgan are twin brothers separated by several oceans. Once, when they were children, they shared a family, a childhood, and a secret imaginary world that had a language of its own: Nahum. But that was decades ago, before Morgan became a wanderer whose only contact with his brother was the Nahum stories, and before Samuel became his brother’s translator.
When Morgan unexpectedly passes away in the Netherlands, the woman he was living with –the mysterious Ana – agrees to accompany his body, and his final Nahum story, home to Australia. What she carries home to Samuel is not just a manuscript, but a startling revelation.
In gorgeous and incisive prose, Sulway conjures a haunting, moving story of the complex relationships and allegiances of family life, of silence and memory, and the power of words and the imagination to transform everything. 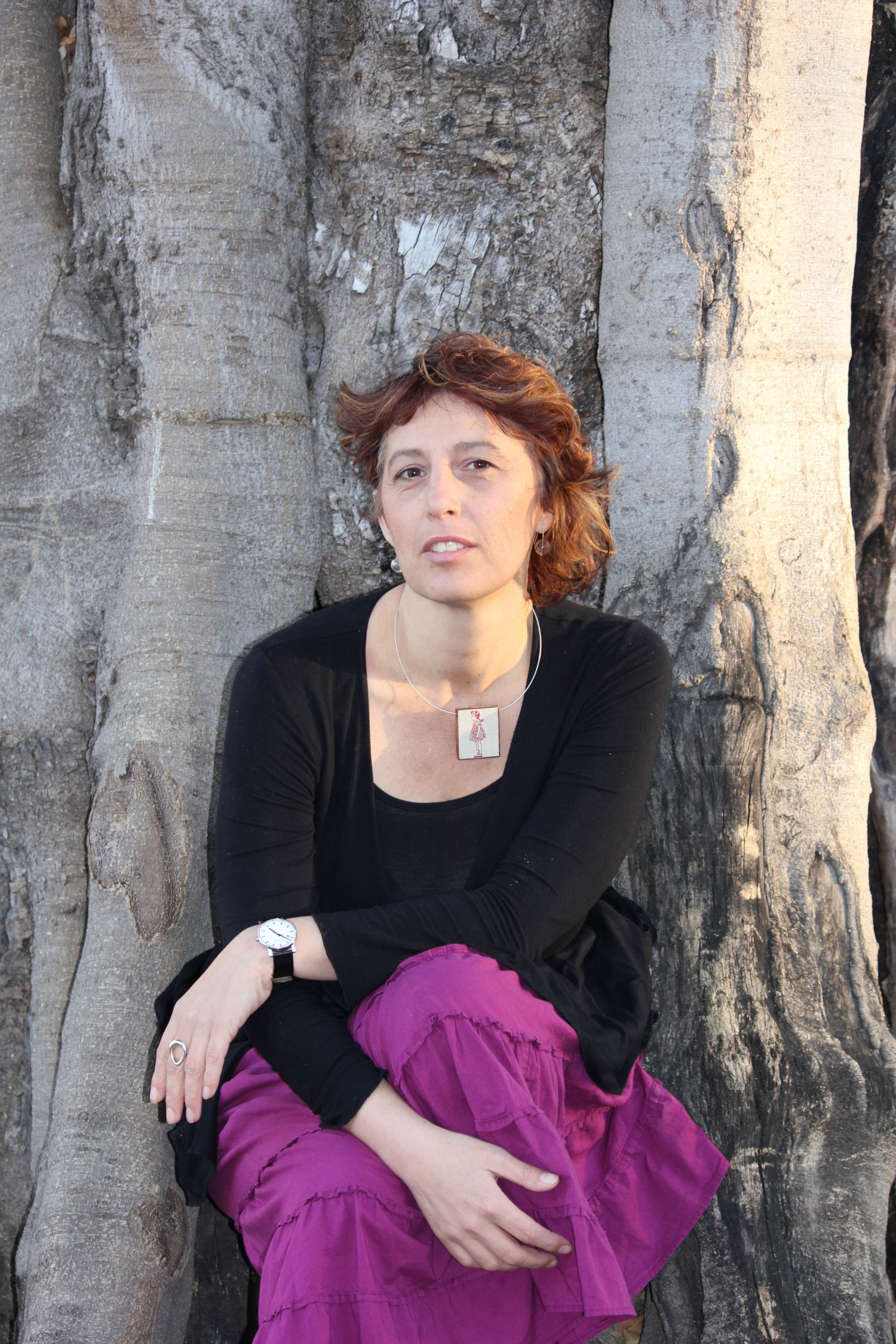 Nike Sulway is a Queensland writer.

Her first novel, The Bone Flute, was the winner of the QLD Premier’s Literary Award for an Emerging Author and was subsequently published by UQP. It was shortlisted for the Commonwealth Writers Award (Asia Pacific Region).

Her subsequent works have won and been shortlisted for several awards. Her previous novel, Rupetta, is a work of speculative fiction. It won the James Tiptree, Jr Award (US) and the Norma K Hemming Award, and was shortlisted for the Aurealis Awards and the Crawford Award (UK).

She works at the University of Southern Queensland in Toowoomba.

This strange, dreamlike tale is an accomplished and beautifully written exploration of the nature of intimacy: between brothers, between lovers, between women. It also explores the nature and function of language, including some extraordinary set pieces on translation and grammar. Sulway is an experienced, award-winning writer and scholar, and it shows in this confident, sophisticated and imaginative novel.

http://www.smh.com.au/entertainment/books/dying-in-the-first-person-by-nike-sulway-20160527-gp5eiv.html#ixzz4AmKBG4q6
It seems as if 2016 is the year of books about grief and dying. The inevitable mortality of individuals and their loved ones has built-in gravitas and emotional resonance as subject matter, but it also carries an expectation of some kind of originality or exceptionalism – grief is, after all, an experience that everyone has at some point in their lives. Nike Sulway’s novel Dying in the First Person achieves just that: it tackles a deeply affecting story in an original and lyrical way. It’s heartfelt but never sentimental, and it sits with recent novels by Georgia Blain and Kirsten Tranter as a must-read.

Once every now and then amidst all the books I, as  a bookseller must read as part of the job of selling books, a special novel lands in my  lap and has me mesmerized from start to finish.  “Dying In The First Person” falls squarely into this category.

Samuel and Morgan are twin brothers who, although close growing up, have gone their separate ways in adulthood. As is the way with many twins, they relied on each other, without the need for other companions, sharing a secret imaginary world of mythical proportions that even had its own language: Narhum. Morgan however, becomes a wanderer, cutting all ties with his family except when he sends stories written in Nahum that his brother translates. The great mystery of the novel is why have the brothers become estranged when once they were so close? When Morgan dies unexpectedly in the Netherlands, his partner, the mysterious and enigmatic Ana, accompanies his body back to Australia with his final Narhum story. She embarks on an affair with Samuel, each seeking to reclaim that which was lost. Gradually all is revealed in the latter pages of the novel, with some startling revelations.  Samuel is forced to re-assess everything he thought he knew about his brother.

Nike Sulway covers a lot of ground in this novel. Some of the themes touched upon (but by no means all) include: the transience of life and how language despite its complexities is inadequate. As the juvenile Samuel reflects after his brother has destroyed thousands of newly spawned tadpoles: “How easy it was to murder not just one creature but hundreds. Thousands….Words could not express one millionth of the instantaneous and knee knocking beauty and complexity of existence.” The relationships between mothers and sons as well as fathers and sons are examined. How is masculinity defined?  How reliable are memories? Should promises made to dying people be enforceable when they do not have to deal with the consequences?

There are many layers to this novel with such care and skill invested into the prose as well as the storytelling that I found myself re-reading numerous passages just to appreciate how well they were written with such loving attention to detail. There is a wonderful description of Solange, the twins’ mother, cooking Christmas dinner on a sweltering day,that is achingly familiar to any child who grew up in the sixties.  Simple everyday activities suggest a life now past of uncomplicated pleasures: the joy of borrowing books from the library, the languid days spent fishing, the satisfaction of making cakes from scratch. All of which build a picture of idyllic family life, constructed however from a fragile fabric.

I thoroughly recommend this novel to anyone who enjoys a challenging read. Its images will stay with you long after you have turned the last page.

Ann Hewitt, The Booktree Toowoomba May 2016

Queensland author Nike Sulway‘s newest novel, Dying in the First Person, is a haunting, lyrical and evocative work that steps outside the boundaries of most existing literature and offers us something entirely new.
In essence, the narrative is about twins Morgan and Samuel, and the aftermath of events that occur after Morgan drowns in the Netherlands and his body is brought home by the mysterious Ana, with whom he lived. But the story cloaks these bare facts in the luminosity of language, in the grief and loss of family secrets, and in the fallibility and subjectiveness of memory.
The first three quarters of the book are narrated by Samuel, from the point of his brother’s death and when Ana arrives in his life. When they were younger, the twins created an imaginary place – Nahum. The enormous detail with which Nike has recreated this place for the purposes of this story is amazing – we are introduced to the geography and topography of Nahum, to the men who live there, and to the creatures that make it their home. But most importantly, we are introduced to the language of Nahum, a completely new written and spoken language. As an adult living in Amsterdam, Morgan has cut off traditional contact with his family (his brother Samuel and his mother) but continues to send stories written in Nahum to Samuel, who faithfully translates them and sees them through to publication. Samuel even gives presentations on Nahum at linguistic conferences. He hasn’t seen his brother in over 20 years, but he retains this connection through their shared language and stories. When Morgan dies, Ana travels not only with his body but with his last work – a final story for Samuel to translate, to reinterpret his brother’s voice to the world.
So much of this book is bound up in the intricacies of the spoken word and the subtleties and difficulties of translation. The particularities of Nahum are extrapolated to discourse on language generally, especially those languages that are now lost to time, or oral languages that have been spoken by the last individual to comprehend their meaning.
The other major theme of the novel – the secrets of families and the fickleness of memory – is explored through the gradual and gentle release of information throughout the story. We learn of the twins’ father’s death, and their mother – Solange – becomes a more important character as the novel progresses.
And finally, the last quarter of the book is narrated by Ana, and we discover that everything we thought we knew must be questioned, everyone we trusted must now be re-evaluated, and all of the complex relationships in this story must be viewed through a new prism.
When reading this book, you can feel the dense weight of its birthing, the solid research that has gone into creating Nahum and all its distinctive curiosities and peculiar strangenesses. Much like Morgan’s stories, this novel is a complex and intricate tapestry of imagination, allegiances, betrayals and sacrifices. And it is, finally, about the complications of love, but not only the setting aside of self for those we care about. It also – crucially – explores the perhaps less commonly discussed (and yet surely as universal and prevailing) trait of the duplicity of love, of the breaking of promises, and the deceptions and failures we both enact and endure. The poignancy of loneliness and sadness is considered with great sensitivity.
While the novel reads in parts like a work of philosophy, it is always and gently returned to the pragmatics of the story, with the consequence that while we feel we have read an engrossing and tense narrative, we have also been guided on a reasoned and metaphysical analysis of the structure of language, the moving power of prose, and the transformative potential of memory, silence and voice. Cass Moriarty,  May 2016
At page 145, Sulway writes that a paper Samuel delivers about his late brother’s work seemed “elegant, informed, generous, intelligent” which perfectly encapsulates Sulway’s work in Dying in the First Person. It’s that rare book that is both accessible and sophisticated; and constantly surprising. It will linger in your mind long after you lay it down. Five stars.