Susan Biggar fell in love with a New Zealander. Maybe as an American, she saw Darryl as a ticket to an exhilarating, global life. When her first son arrived, he came with fierce blue eyes, a curly toe and cystic fibrosis. The doctors said he would be lucky to reach the age of thirty.
A job offer in Paris snatched the family from New Zealand, depositing them in the city of lights, romance, and a whole new medical world. When Susan’s second baby was also born with cystic fibrosis , the insignificant worries of her old life slipped away, shifting her from ‘normal mum’ to ‘gotta-figure-out-how-to-keep-the-kids-alive-mum.’
This, and all that followed, was not what she expected.
Set across the globe, in California, New Zealand, France and Australia, The Upside of Down is a story of belief, of learning that sometimes joy is a decision.

‘A rare combination of laugh-out-loud humour and an intensely honest exploration of
difficult issues. It’s like Eat, Pray, Love but with children, a husband and health issues along for the ride! Anyone who has ever experienced illness in their family or considered an expatriate life will want to read this book.’ Andrea J. Miller, Shares in Life Foundation, NZ 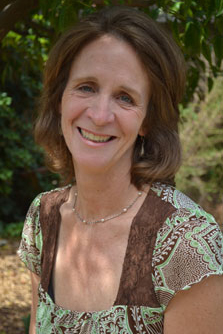 Susan Biggar was raised in the San Francisco Bay Area, but lived in Europe and New Zealand for a decade before settling in Melbourne, Australia. She holds degrees in Politics and International Policy from Duke and Stanford universities (BA/MA).She has written for many publications, including The Age, Good Weekend and The Big Issue. She now works in consumer health, encouraging a more patient centred health system with a greater role for those who rely on it.

Susan Biggar was less than vaguely prepared for motherhood. When it came early, her son was diagnosed with cystic fibrosis. As maternal instincts kicked in, so did a steep learning curve on chronic disease and a whole new relationship with the medical profession. Biggar’s narrative steps neatly away from cloying sentimentality or the maudlin. She’s a practical American who married a New Zealander and came to live all over the world – complete with two children with CF. She tell tales of medical systems and doctors, of happy, growing offspring, and of her ability to keep her faith, despite noxious responses from fellow church-members when she terminates a CF pregnancy. It is a very different memoir which points out that no one quite knows the way life will turn out. Four stars.

According to the author, living with cystic fibrosis is like living with an earthquake, never knowing when the condition is about to erupt. Biggar uses the comparison with experience of both living near California’s San Andreas fault and the battle her family has fought with two of her children dealing with the effects of the debilitating illness. “From the outside we look reasonably normal … underneath our family’s little world the ground rumbles and shakes, occasionally shocking us with its force,’ she says of her battle to tame the problem. Based on her traumatic experiences, now Melbourne-based Biggar advocates a more patient-centred health system after feeling “powerless and frustrated”.