View cart “Black Rock White City” has been added to your cart.

Hauntingly beautiful and told with remarkable clarity, Over The Water is the story of an Australian outsider who finds teaching work in Bandung, a city in Java. Seduced by the sights, sounds, and magic of Indonesia Joe finds himself unwittingly drawn into the lives of three women. Firstly he rents a room in fellow teacher Lisa’s house, and discovers that she has a small harem of Indonesian boys living with her. Then there is Danu, a Javanese beauty who says she is trying to escape an arranged marriage. Both Danu and Joe find common ground in seeking aspects of themselves ‘over the water’ – for Danu this means the West, for Joe it means the East. Joe also feels a connection with Babette, a reclusive English woman who lives in a crumbling Dutch villa. She is an old friend of Joe’s elder brother, Emile, who once lived in Bandung. Her relationship with Emile has long ceased, but Joe makes a remarkable discovery. As Over the Water unfolds, Joe discovers that his identity is not only fragile, it is disturbingly arbitrary. Based at least in part on the author’s experiences of living in Indonesia, this compelling debut is the quintessential novel about East and West, and how our dreams manifest themselves.

‘A kind of Wake in Fright set in Indonesia, Lane paints an unsentimental portrait of wanderlust and the perils of freedom. But he doesn’t stop there. With hallucinatory vision, he draws back the curtains to reveal the inevitable pull and power of a mythic undertow.’ – Courtney Collins, author of The Burial. 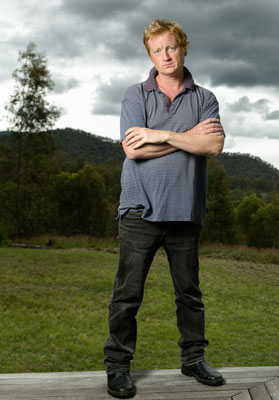 William Lane lives in the Hunter Valley, NSW, where he is raising three children. After completing an Honours degree in Australian literature, he travelled and worked in a number of different jobs. In addition to reading and writing, his interests include music and education. He has completed a doctorate on the Australian writer Christina Stead, and has had several critical articles on Stead published in literary journals. He is the author of three other novels: Over the Water (2014) and The Horses (2015) and The Salamanders (2016).  An earlier and different manuscript version of The Salamanders (titled An English Girl) was shortlisted for the Vogel Prize. An earlier version of The Salamanders also won a Varuna Litlink Fellowship in 2010.

PICK OF THE WEEK

Twentysomething Joe arrives in Bandung, a city on Java, to teach English, in this moody and unsettling novel from William Lane. Anyone who has had a similar experience will recognise immediately what the author evokes with precision: that the borders of an expat’s identity are somehow more porous, looser. The novel charts Joe’s interaction with various women – Lisa, a fellow teacher, with her harem of Javanese boys; Danu, a local beauty who claims to be seeking an escape from an arranged marriage; Babette, an English recluse and friend of her brother’s, who lives in a crumbling colonial mansion. Over the Water is a taut and densely imagined encounter with Indonesian culture, the myth and superstition that pervades it and the tensions between East and West.

… the more time he spends absorbing and exploring the culture of his new home, the more Joe discovers about himself.

An unexpected sense of menace and melancholy pervades this debut novel about cultural difference and identity, set in Indonesia’s third-largest city. Following in the footsteps of his enigmatic older brother, 23-year-old Joe arrives in Bandung to teach English and immediately ‘struggles with that imposter feeling’. As a seemingly innocent outsider, he quickly becomes embroiled in the lives of various women, both foreign and local. His relationships form with an accelerated intimacy and he begins to question the possibility of romantic love and the notion of freedom, leaving him feeling uncertain of his place in the world. It’s this sense of displacement that William Lane captures so well.

This is a refreshingly original exploration of the gulfs and bridges between Australia and Indonesia, one that goes beyond the superficiality of massages, temples and sunset cocktails. The final pages are a sobering reminder that, no matter where you live in the world, freedom often comes at a price.