It is 1997 in San Francisco and Simon and Sarah have been sent on a quest to see America: they must stand at least once in every 25-foot square of the country. Decades later, in an Australian city that has fallen on hard times, Caddy is camped by the Maribyrnong River, living on small change from odd jobs, ersatz vodka and memories. She’s sick of being hot, dirty, broke and alone.

Caddy’s future changes shape when her friend, Ray, stumbles across some well-worn maps, including one of San Francisco, and their lives connect with those of teenagers Simon and Sarah in ways that are unexpected and profound.

A meditation on happiness – where and in what place and with who we can find our centre, a perceptive vision of where our world is headed, and a testament to the power of memory and imagination, this is the best of novels: both highly original and eminently readable.

‘I thoroughly loved this book. I know so much more about the present and the future. Melbourne looks great as a ruined tropical mega shanty town − I can’t wait. This must be the first of a new genre-or it’s the wrecking of a few old ones. Film-like, dream-like, life-like. Funny, and charming.’ Dave Graney , author of 1001 Australian Nights

‘A free-range and funny apocalyptic time-space road trip, with James M. Cain, J. G. Ballard, and Tom Robbins all fighting for the wheel.’

Steven Amsterdam, author of Things We Didn’t See Coming and What the Family Needed. 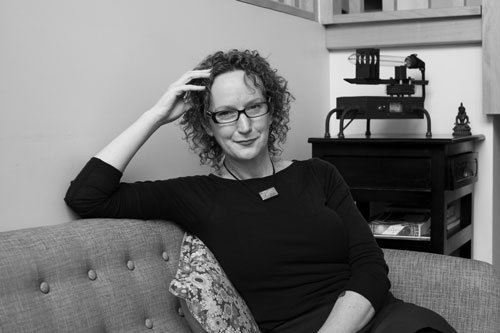 Jane Rawson has written a novel, A wrong turn at the Office of Unmade Lists, which won the Small Press Network’s 2014 ‘Most Underrated Book’ Award and was shortlisted for the Aurealis Award for best science fiction novel, and a novella, Formaldehyde.

She was formerly the Environment and Energy Editor for news website, The Conversation.

She lives in Melbourne’s inner west and at janebryonyrawson.wordpress.com.

A Wrong Turn … is a wacky meditation on loss and grief, on creativity, on treating the planet badly, and on making the best of things. It deals with serious environmental and social issues, but it’s also great fun – the tone, at times, recalling Douglas Adam’s The Hitchhiker’s Guide to the Galaxy. While the seams of the plot sometimes stretch almost to breaking point, ultimately the exuberance of Rawson’s vision prevails.

Yes, it’s a very odd plot …  but Caddy– lost, lonely, self-deprecating Caddy – trying so hard to live some kind of a meaningful life despite her bereavement and the horrible state of this future Melbourne in all its ghastliness, wouldn’t let me toss the book aside.

Jane Rawson’s A Wrong Turn at the Office of Unmade Lists (Transit Lounge, 320pp, $29.95) is one of those wonderfully quirky novels that giddies with the quality of its imagination.

Rawson, a former Lonely Planet guidebook writer, now an editor at journalism website The Conversation, has concocted a playful fiction that breaks the rules of narrative and gets away with it.

The action begins in Melbourne, but a Melbourne imagined in the aftermath of environmental calamity. It’s a refugee city, manned by a UN peacekeeping mission, that has drawn people from across a globally warmed world. For the vast majority existence is a day-to-day struggle. Caddy, who has lost her husband following the explosion of their neighbouring oil facility, turns tricks and wheels and deals her way to subsistence, spending any excess on vodka and tonic. In her spare time she writes short stories, although not with the goal of getting an advance. Ray is her friend and pimp. A knockabout bloke of Aboriginal heritage with a nose for a deal, he does his best to help keep his mate Caddy afloat.

Rawson’s characters are warm and intriguing, the inventive logic of a dystopian Melbourne excellent. Her guidebook pedigree makes sense as we can detect the borrowing of places from Brazilian favelas to Asian internet cafes. But this is really just the beginning of the imaginative journey. In his deal-making Ray acquires a series of old maps whose folds have a portal effect. Meanwhile two kids are trying to fulfil their dead parents’ mad ideal of visiting all of America, which they have divided into squares.

In some ways, A Wrong Turn at the Office of Unmade Lists is reminiscent of early Paul Auster, most notably In the Country of Last Things. There’s something too of the sheer storytelling joy that you find in Neil Gaiman, the meaning subsidiary to the narrative adventure. While early Peter Carey is an exception, we don’t often see this kind of fiction in Australian literature. It’s the strand of the novel affiliated with Cervantes’ Don Quixote rather than the later work of the realists. Rawson has taken risks with plausibility and triumphed.

I’m really surprised I was so affected by this novel. I hadn’t considered it high literature, whatever that may be, nor a tear-jerker when I picked it up. But it moved me. It’s one that I’d like to reread and I don’t do that often. More importantly, I’m really looking forward to what Rawson comes out with next. Five Stars

Reading A Wrong Turn At The Office of Unmade Lists is a blinkers on sideways rollercoaster ride – you can see the ups and downs but you can’t see the changes in direction and they surprise and delight you. Jane Rawson has a knack for describing settings and place and for conveying meaning through perfectly picked, hammered and nailed down dialogue. And yes there are jokes. There is a thread of snarkiness all throughout this book.
And underneath all the surprises, the snark, the ‘I have no idea where I am going with this’ sense of surrealistic madness, it’s about how we choose to live our lives and what creates the most meaning for ourselves and how we come to understand that about ourselves.